If a dataset is large, then the creation of a chart takes a lot of time. At times it even times out due to the size. And we aren't even talking about millions of records! So this needs to be sped up.

Task was assigned to Paul Hoekman

A new caching system has been set up. Just to keep the technical functioning documented:

Let's see how this performs over the coming weeks and months, but I can at least report that 20 second generation time is down to less than 1 second for those that I have checked, so looking much better! 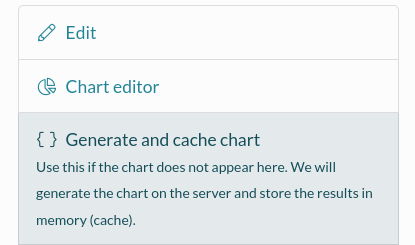 The technical stuff goes over my head with this one, but I what caught my attention is that you changed the buttons...this is because I'm missing the “+ Add image” button that Guus had put there. It was very handy to add visualisations of graphs (screenshots) and we are using it a lot. Did you remove it during this task by any chance and could you add it back?
(The alternative of adding an image with link in the table, here for example, does not make for a good workflow.)

Hey Carolin,
I didn't get or see a notification of your reply - sorry for the delay. But I removed that + button indeed for datasets, because I wasn't aware it was still being used in CL. As a general concept it isn't ideal if people upload images to datasets and instead we should have our system dynamically generate the visualizations. But I will put an exception in so that in the CL project people will still see the button.